ChefBot didn’t let us down, and everything went well in the competition. Even though we had some technical problems in the morning we managed to fix everything in time, and ChefBot won prizes from Yonder and SDL.

Unfortunately, with all the stress and preparations, we didn’t managed to film ChefBot in action, but happily the press did it for us: ChefBot slicing the potatoes

As promised, here is the video with ChefBot slicing the potato 🙂

As you have already seen, we have built the component that allows ChefBot to drop the potato from the fork into the slicing device. Here is how it all works: after grabbing a potato, Chefbot will lift it’s arm to the maximum, will turn it to the right, will let it down a little bit, and then will turn it left, until it touches the potato remover component. Then the arm will raise up and the potatoe will fall.

ChefBot is finally getting closer to it’s final form: we still need to add the two cameras that will be ChefBot’s eyes, and also a few more sensors, but the main components are all done. As you can see in the picture, we have attached the slicing device and we also created a component that will be used for removing the potato from the fork. Here is how he looks now… isn’t he pretty? 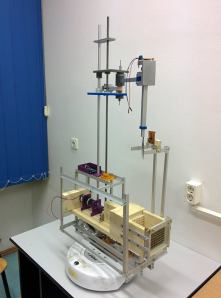 The slicing device is composed of a piston that pushes the potato through a blades system. But as simple as this mechanism may seem, we have been struggling to build it for almost a week, as it has been way more challenging than we initially thought and problems arose at every step.

The first issue was the fact that the Lego motors we used for moving the arm are not very powerful, and even with a reduction we weren’t able to use them to move the piston and press the potato through the blades. However the solution for this was quite obvious: we used a more powerful motor, with a reduction of 1:139 and 3.8 W.

Then we had a lot of problems with the blades system. We initially tried to build it ourselves with two sets of cutter blades, hold together by a piece printed with the 3D printer. But even though the smaller version we built for testing purposes (it only had about 5 blades per set) worked fine, the real one didn’t because the blades bent. Then we tried to remove one of the sets of blades and see what happens, but they still bent. Here is how it looked after removing one of the sets:

The problem was that the blades were too tall and didn’t had enough resistance. So after a lot of searching on the internet, we came across something for sale that seemed to better fit our needs (and happily it arrived in just one day):

Working on the piston was not very hard but rather time consuming. Because of it’s dimensions and the high level of accuracy needed, it was not possible to print it with the 3D printer, so we decided to make it from wood. Here is the initial version of it, with the motor and some touch sensors already attached:

And the whole mechanism, potato included 🙂 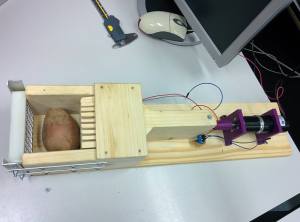 But of course that the pistons’s teeth, which were designed for the first blades system, didn’t match with the second one. So we had to cut all of them off and recreate them, which took us another couple of hours since we only had a saw available in the laboratory.

This time the testing went fine, but unfortunately we didn’t had the time to film it. But we promise to attach the whole mechanism to the robot and upload some videos as soon as we can.

After a few more adjustments, ChefBot is now able to lift potatoes on his own. Because previously it looked like the motor doesn’t have enough power, we had to make a reduction to fix this problem. As you may notice this made ChefBot’s arm move a little bit slower up and down, but this is fine as speed is not that crucial for our purpose.

So here is ChefBot grabbing the potato (this time we also added a component to keep the fork together with the rest of the arm, so now it didn’t needed our help like in the previous video).

The arm is almost finished now, so we decided to test it and see how it works so far.  First, we tested how it spins (actually it won’t really need to spin this much, but we just wanted to see that everything is fine).  For this part we only used the actual arm, meaning that it wasn’t attached to the robot, and it also had some components missing.

Then we’ve put everything together, and for the first time, ChefBot actually grabbed a potato and lifted it a little bit.

Actually a small component is still missing, that will keep the fork from falling (that’s why, as you can notice in the video, we had to hold it ourselves) and we still have to work on detecting the potato (for the test we’ve just conveniently placed the arm above it) but things are progressing, so hopefully the day when ChefBot will be a great cook will come soon.

After the initial testing the first problems arose, as it turned out that ChefBot’s arm was not stable enough. When the arm was moving up and down, it also had an horizontal oscillatory movement, that could have easily prevented the robot from grabbing the potato.
So in order to fix the problem, the first decision we took was to make the arm a little bit shorter: 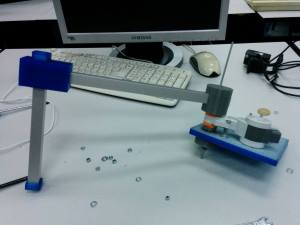 We’ve also noticed that the motor had a slight up and down movement, so two more 3D pieces were made in order two prevent this:

Also, we designed a new piece that will better keep together the two bars on which the arm slides:

So here is the final result: 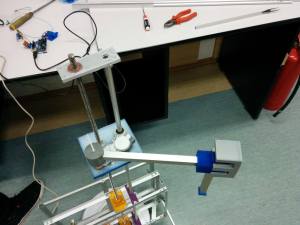 Besides this, we also worked on the fork that will actually grab the potato, and we are now integrating it with the rest of the arm.

So as you can see the arm is soon going to be done (a few more pieces are required, that should be printed this days) and then we can actually test ChefBot grabbing the potatoes. We will keep you posted!

Hello,
I am ChefBot, and I’d like to introduce myself. I am a robot that just came to “life”, and even though I still have a lot to learn, I am slowly getting closer to the day when I will become a great chef :).

So far I’ve learned to detect the bowl and move close to it, but I’m also starting to figure out how to move my arm. Just watch me in action and see what I can do, and I promise to keep you posted with my progress.

Lately we’ve been working hard on building the robot’s arm. Now that we’ve finished printing the necessary pieces with the 3D printer, we are trying to put everything together. But since a picture is worth a thousand words, we thought that we would better let you see for yourself. 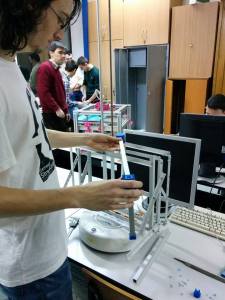 Working on the motor that will move it:

Here is a better view of the motor, after the arm was attached:

And here we started to test it:

We will keep you posted with the results, and we will also try to upload a video as soon as possible, so that you can finally see Chef Bot in action.